Skip to content
Return to top
On this page

Trust is the cornerstone of prosperity and innovation — it facilitates interaction and exchange between people. Most waves of progress arose from discovering social and technological means to scale up trust. Everything from religion to education to banking to law to trade-unions and so on, has helped scale mutual trust between people. All of these mechanisms for promoting trust depend on centralized institutions — instead of trusting every individual, people could trust intermediaries like their bank or government. The explosive growth of the internet has also caused people to, once again, outsource their trust to central institutions. These institutions, however, exhibit many of the same flaws as their predecessors — namely, they become increasingly corrupt and increasingly exploitative, as their revenue-growth inevitably declines.

The Interlock Network leverages — among other things — the latest Blockchain Technology to achieve decentralized and resilient trust on the Web. While the early Web was the most democratic that the Web has ever been, it was quite small. However, growth exploded when Web2.0 came around, effectively democratizing and globalizing participation on the Web. The darkside of Web2.0 is that it sustains itself by data-mining and selling their users' personal information, in addition to optimizing their feeds and search-results to keep users engaged and clicking on advertisements. This state of affairs is a clear perversion of the original vision, ideal, and promise of the Internet and Web. The next evolution of the Web — the blockchain-powered Web3 — can correct the course and re-democratize the web without sacrificing its accessibility.

In a sentence, the Interlock technology-stack moves security to the edge of the network (i.e. the individual users) and collects anonymized data from the edge to improve the threat-detection capabilities of different parts of our stack.

The mass onlining of people during the web2 era has created a target-rich environment for cyber-criminals, scammers, and high-tech-grifters. While people have to deal with online service providers and social networks — that seek to exploit their attention — they also have to deal with rapacious, anonymous online criminals — that seek to exploit their bank-accounts and credit-cards. A huge part of the problem is that the wealthiest technology companies cannot justify the costs of securing their own users, as securing them necessarily causes disruptions to their advertising-revenue stream and disruptions to their personal-data-marketplaces — which are often frequented by criminals, and nation-state-actors.

The insecurity of the internet-user — whether browsing from home, from work, or on-the-go — has reached pandemic proportions. For example, 75 percent of attacks are successful, and they have an average cost of around 4 million per attack. These attackers are rapidly shifting their attention and resources to the crypto currency ecosystem.

There is an unintentional, but mutually-supporting, dynamic between the corporate online platforms that violate our privacy and the criminal online grifters that violate our security. Interlock believes that both privacy and security can be improved by moving trust away from the center of the network (i.e. Facebook, Google, etc) to the edges of the network (i.e. directly into people's browsers and onto the blockchain).

Decentralizing Security with the Interlock Extension #

Security is a very difficult problem, and while much of the blame can be directed at the incentives of large tech corporations, some of it can also be directed at users feeling inconvenienced by security, for no observable benefit. Just as (almost) nobody wants to brush their teeth three times a day, nobody wants to jump through multiple security-hoops and fight with their security tools to enjoy the internet. Good and unintrusive security tools also face the leaky-roof-problem — just as people usually do not notice the roof on their home until it starts leaking, people do not notice security tools until they fail to prevent a breach.

Interlock takes a two-pronged approach to solving the problem — we attack the problem in the browser and on the blockchain.

We secure users' browsers from phishing-attacks, credential-theft, impersonating-blockchain-sites, credit-card-phishing, credential-theft, and scam-wallets with a — uBlock-based — browser extension called Interlock. In addition to blocking ads, the extension uses an advanced visual-indicator-of-threat to detect phishing pages and scam-websites, and prevents users from entering any sensitive information like passwords or usernames. We seek to motivate users to install and use the extension by linking it to a crypto-currency token. Users earn tokens — initially — for installing the extension and browsing the web with it, and — once they have enough — they can stake grey-area-entities (i.e. pages and domains that our algorithms could not determine the trustworthiness of). This staking is essential to improving our models and heuristics, and it is an opportunity to earn a percentage return.

In case users feel that they do not have the qualifications (or the time) to analyze grey-area-entities we offer a passive "no-brainer" staking option. A user can stake in the Interlock Network. These staked tokens can in turn be used by the most successful active stakers, to stake grey-area entities. The active stakers get to take half of the yield of the tokens that were staked by passive stakers.

We use the Aleph Zero blockchain as a decentralized and transparent open-source mechanism to facilitate the movement of tokens and the distribution of staking-rewards.

While doing all of this, we collect all anonymized browsing data that the user has chosen to share and we use it to improve the data-sets used for threat-detection, threat-intelligence, business-analytics, and KYC. This data is then used by us and our partners (i.e. crypto-currency exchanges and other commercial entities) to improve their products and protect their customers. 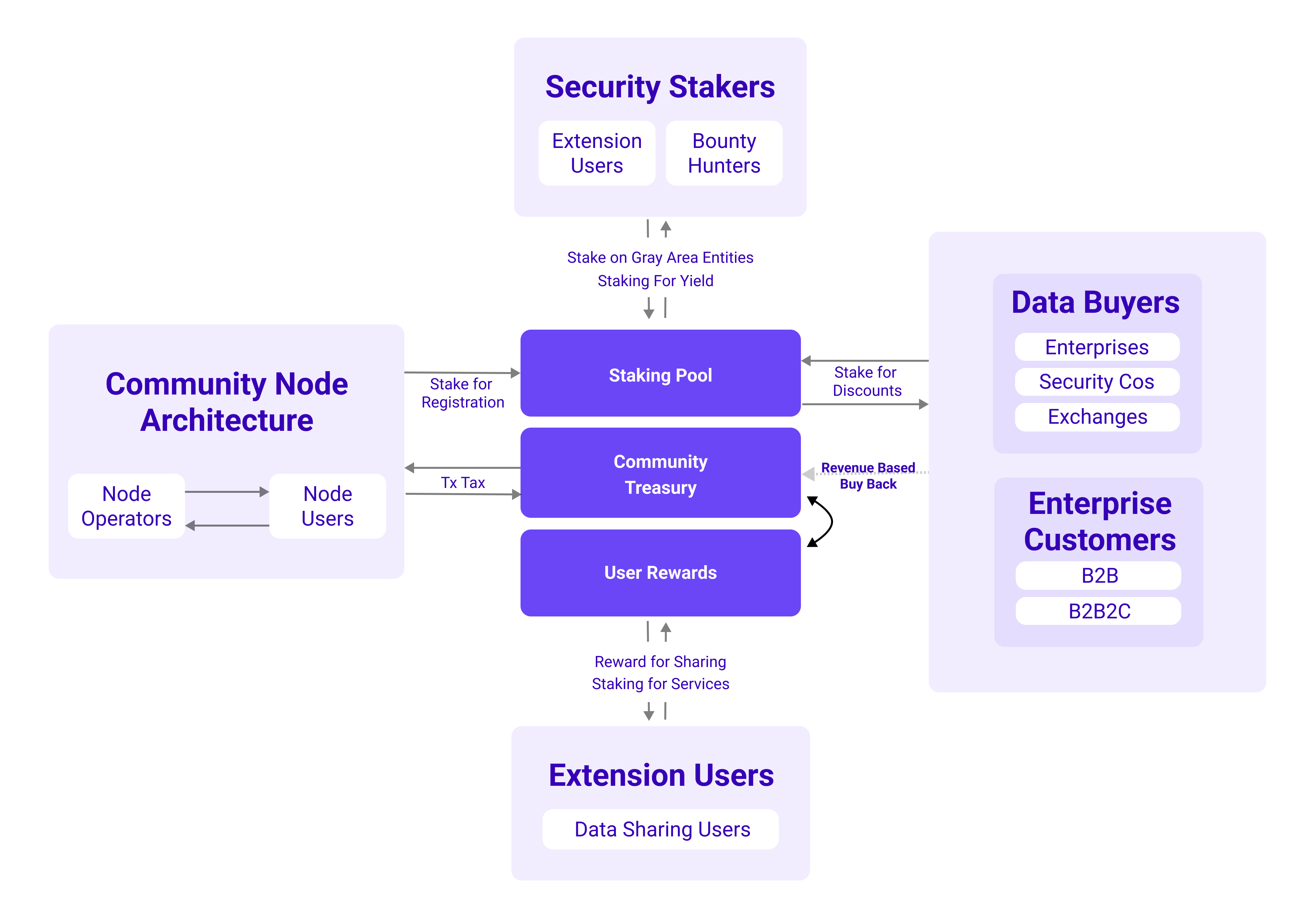 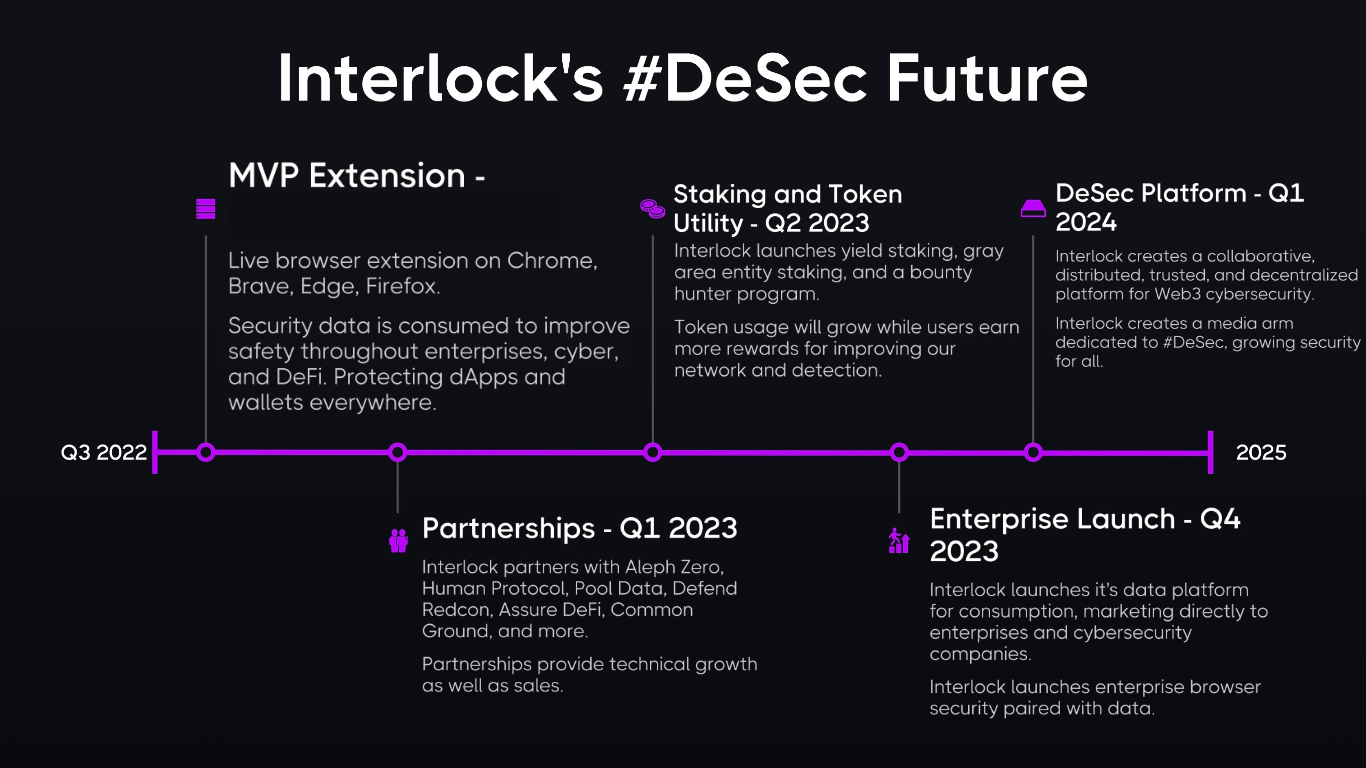 Please see the FAQ and technical whitepaper for more details and information.

In short, we plan to emit 1 billion tokens, over an 86-month period. Here are the first 3 years of emissions, divided into half-year periods.

Interlock mints a maximum of 1 billion tokens, and pledges to spend at least 20% of revenue to buy-back tokens. Once bought, tokens may be burned or used to contribute to the network (i.e. by financing the rewards-pool for users, etc).